Why PCI DSS is in a continued state of fail

Data breaches abound, half a million sites fall to SQL injection in 2008…the headlines are horrific and leave me to wonder.
Where does the PCI DSS fit in all this, if at all?
According to the WHID report about the rampant SQL injections, 11% of the sites were finance oriented and another 11% were retailers. According to my mad math skillz, that indicates that it is possible that 22% of 500,000 sites that fell to SQL injection attacks last year were beholden to PCI DSS. That’s 110,000 PCI sites that apparently failed to meet a very basic standard.
With my ear to the tracks for ongoing indiscretions, a delightful tidbit hit my radar, courtesy of a cheeky fellow in the UK named Michael Kemp of clappymonkey, who, whilst recently bored, was exploring the PCI Security Standards Council (PCI SSC) website, when lo, what did he find?
Yep…a lovely XSS vulnerability, in all places, the PCI QSA search script. 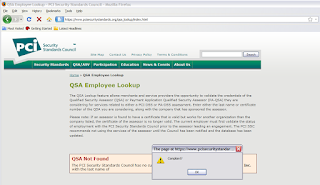 Mike indicates a swift fix on the part of PCI SSC on his blog, but I must say, this finding lends itself to some serious questions. I simply couldn’t let something this rare pass by unfettered.
1) Why isn’t the PCI SSC applying its own standard to itself? Fortunately, given no apparent forms oriented to taking payment card information on https://www.pcisecuritystandards.org, they’re not beholden to their own standard. But it would seem that a WAF or a review of site code per PCI DSS 1.2 Section 6.6 to prevent cross-site scripting as indicated in PCI DSS 1.2 Section 6.5.1 would be in order, yes?
2) Are we to believe, if PCI SSC doesn’t adhere to its own standard, that anyone else will, except during the annual audit? As there is little to no enforcement of PCI violations, it seems unlikely that PCI DSS will continue to be any more than a self-congratulatory security check list method with which enterprise can meet minimalist requirements once a year.

Allow me further the point.

CSRF falls under PCI DSS 1.2 Section 6.5.5. As part of my ongoing effort to cure the world of ailing web apps I recently disclosed a CSRF vuln in osCommerce. In discussing that vuln with Mike Bailey, he immediately found and disclosed a similar issue with Zen Cart. A couple of quick Google searches yield extraordinary numbers.
“powered by oscommerce” and “powered by zen cart” returned a combined 11,630,000 results!
Now let’s say for argument’s sake that just half of those results point to a legitimate site running the software (probably a low estimate) for a total of 5,815,000. Let’s further assume, because that both these vulns were disclosed recently, that a large majority of these sites are still running vulnerable code. How about half again? We can therefore surmise that 2,907,500 sites might currently be running code vulnerable to CSRF attacks. For our final assumption, how many of those sites are likely required to meets PCI DSS 1.2 standards. By my calculations…ALL OF THEM. You run osCommerce and Zen Cart to take online orders, paid for by credit cards.

So what then are we to say of PCI DSS in its current state of lax enforcement, double standards, and ill begotten data losses? I say, “For shame." PCI DSS could provide so much more, and offer better protection for the many, from the devious few. A standard is only as good as the extent to which it's enforced. The fact that the PCI SSC site didn't even meet its own standard indicates a significant credibility gap. It is my hope that they'll be reviewing their site regularly in the hopes of avoiding embarrassing and preventable flaws like this.

GI was going to say crazy, then I realized I should've expected this. God, if you could just proove they actually did have a WAF...

It's OK, they weren't McAfee Secure.

"By my calculations…ALL OF THEM. You run osCommerce and Zen Cart to take online orders, paid for by credit cards."

Shopping carts with no card data are exempt; only the payment system has to be PCI-DSS compliant.