Russ = Rogueware: Is nothing sacred?

You know you've hit the big time when...;-)
Alright, maybe not, but you still may have to step aside for my ego.
Wait, you already have to do that.
Fine. Never mind.
But this is kinda funny.

Full disclosure:
I use Google Alerts for my name (Russ McRee) and my domain (holisticinfosec).
I'll be quite honest and tell you that it's a combination of ego and paranoia.
I want to know when people say nice things (rare), when they talk smack (more likely), or when they're illegally reusing content (a constant).

Ok, so now you know I auto-Google myself (you should too), but here's where it gets new and exciting.

See the first entry above, i.e. "Russ"?
No good news there.
Looks like keyword abuse or a compromised site pointing to rogueware/scareware:
hxxp://www.tuckmall.com.tw/blog.php?blog=russ+mcree 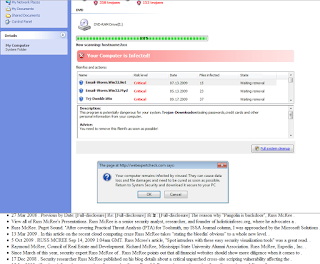 Use caution as always if you choose to go there, fellow bug analysts.
MMPC calls the binary Trojan:Win32/Winwebsec.
The VirusTotal results include 10 detections out of 41 possible.

The rogueware site code is classic.

Multiple IFRAME offering dependent on user agent detection for the primary browser types.
If you're on a Mac you'll be redirected to some crap movie site; otherwise, you must be infected! Click here! Off to virusexamine.com or webexpertcheck.com with you...

Nice to know my name has become worthwhile enough to poison search results for...in Taiwan...on the 11,292,838 ranked site in the world...mixed in with pr0n and Justin Timberlake.
Oh yeah, the big time indeed.

Maltego is the 2009 Toolsmith Tool of the Year

December 2009's edition of the ISSA Journal's toolsmith discusses Maltego at length with specific attention to transforming RFI and scareware attributes.
Maltego is an open source intelligence and forensics application.
While researching and writing for December's article I fell completely for this tool.
It was a difficult decision having covered some brilliant and remarkable tools in 2009, but only one can come out on top.

The 2009 Toolsmith Tool of the Year is Maltego.
Congratulations to Andrew MacPherson and his team.

As an example, I used Maltego to analyze remote file include (RFI) attacks against my website and found it to be an extraordinary addition to my toolkit.
RFI attack URL strings often end with a common script name with a .txt or .gif extension.
I grabbed five such file names as most often seen in my logs from October:
zfxid1.txt
id1.txt
fx29id1.txt
idxx.txt
crespon1.txt
fxid1.txt
I fed these to Maltego and one of the URLS revealed showed results for a U.S. IP address, further showing that it had been flagged seven times for RFI attacks. This IP address has been identified as hijacked host/automated scanning drone due to the fact, that the host at this IP address has tried to injected a malicious script (RFI attack): http://www.ciasoftwares.com/fxid1.txt [show script].
Clicking the show script link then revealed that the script has a hash of a05dfd7cca7771a7565a154d65f05ea2 with all the attack details including script locations (RFI URLs), related IPs, and RFI script details. The figure below just begins to highlight how powerful Maltego really is. 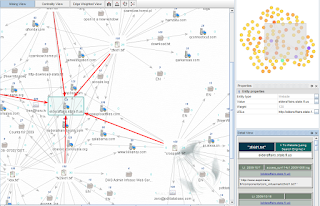 Part 2 of 2 of Vulnerability remediation done *

It makes me sad to use REI as another example of the wrong way to manage vulnerability disclosure; I am a member who is fond of their stores and products. I will not name names or blather on about negligence.
Rather, I will let the facts simply speak for themselves.

1) On April 11th, 2008 (more than a year and a half ago), I reported a cross-site scripting vulnerability specific to the REI website search functionality. Via email I received a reply indicating that "I’ll have our team evaluate this." I had every reason to believe it would be resolved.

2) The issue completely fell off my radar thereafter until one evening I was checking old findings and noticed that the vulnerability remained on October 1, 2009.

3) Surprised, if not shocked, I tried an alternative approach. I called REI HQ and asked to speak with an appropriate party to report the issue again. I was transferred to a person who provided me with an email alias to which I could forward the issue. On October 6th, 2009, only when I requested a reply as confirmation, I received "I forwarded your information on to our Security team."

4) The issue again fell my radar until November 29th, 2009 when, once again, I noticed that the vulnerability remained (nearly two months since October 1). I was quite ticked off at this point and fired off a feisty email stating that if the issue was not resolved, or a timeline for resolution provided, within seven days that I'd publish the finding regardless.

5) Today, I checked again and found the vulnerability remediated. Had I received one reply to any email sent after October 5th? No, not one indication that a solution had been implemented.

Following are screen shot and video.
Think about what this issue might have meant to consumers while noting that yesterday was CyberMonday.

So, to be clear, the issue is fixed, but the response, and the amount of time taken to resolve the issue is beyond disappointing.
I'll leave it at that.
Comments, as always, are welcome.
Should someone from REI wish to offer insight or explanation I will gladly accept the comment or add it to the post.

Part 1 of 2 of Vulnerability remediation done *

Often, when I disclose web application vulnerabilities to Secunia, who in turn works with vendors to drive mitigation and remediation, we are met with vendors who don't reply, don't care, or don't fix.
Yet, once in a rare while a vendor chooses the righteous path.
Such is the case with Pligg.
Pligg posted a detailed, transparent, candid writeup regarding the disclosure and their response prior to the scheduled release date (12/2/09) for the advisory. In addition their new release (1.0.3) addressing the issues in now available.
As I am too often prone to complaining, I relish the opportunity to say "well done."
To Pligg, a hearty thank you; you are now amongst the standard bearing few who swiftly address vulnerabilities, do so with candor and transparency, and care about your user base.
When the advisories go live as scheduled tomorrow they will be found here and here.
Again to Pligg: well done.