I've been a busy lad of late and haven't been keeping up on posts, but I have been turning out some work elsewhere.
If you haven't already taken note, checkout my second installment for InfoSec Resources, specifically OWASP Top 10 Tools and Tactics.
It even made #4 on Reddit under NetSec and was March 24th's Post of the Day on PenTestIT. ;-)

Software will always have bugs and by extension, security vulnerabilities. Therefore, a practical goal for a secure software development lifecycle (SDLC) should be to reduce, not necessarily eliminate, the number of vulnerabilities introduced and the severity of those that remain.

Exploitation of just one website vulnerability is enough to significantly disrupt online business, cause data loss, shake customer confidence, and more. Therefore, the earlier vulnerabilities are identified and the faster they are remediated the shorter the window of opportunity for an attacker to maliciously exploit them.

The conclusion is therefore simple: reduction and remediation of web application security flaws will shrink the number of attack vectors and improve security posture. Ground breaking, right? No, it’s old news, “security posture” is a worn out buzz phrase, and if everyone was diligent about the above mentioned reduction and remediation, we’d likely not need a Top 10 list or a 12th Website Security Statistic Report (count on one). But hey, then we’d have to find different work, right?

Gifford Pinchot once said “Never bet on a race unless you are running in it.”

As solutions are always better than complaints, let’s discuss how to get in the race with some tooling options as we explore each of the Top 10.

You know I'm an SDLC fan, and an ardent supporter of OWASP. This article blends those passions along with some insight as to how I conduct web application vulnerability research.

Note: Over the next few months, I'll be drilling into to each of the OWASP Top Ten, exploring the specific vulnerability and the aforementioned tooling and tactics to aid in better discovery and mitigation.
Look forward to those followup articles at InfoSec Resources.

Python is a powerful and dynamic programming language that is used in a wide variety of application domains such as web and internet development, databases access, desktop GUIs, scientific and numeric, education, network programming, software development, as well as games and 3D graphics.
As a security analyst I'm always interested in ways to better query vast quantities of text such as parsing web server logs for various signs of evil.
Jeff McNeil's Python 2.6 Text Processing Beginner's Guide from Packt Publishing struck me as useful resource with which to improve Python skills specific to text processing.
This book is intended for novice Python developers interested in processing text (me), and is laid out and written so as to be very supportive of this cause.
First published in December 2010, Python 2.6 Text Processing is organized via these conventions:
I appreciate the logical flow of the book, moving from basic concepts and IO handling, to strings services and standard library usage, to regular expressions, structure markup, encoding, and advanced output.
With my interest in web server log manipulation I found myself able to quickly embrace the concepts offered and make us of this book's code samples offered on the Packt Publishing website.
Anyone who operates a website and spends any time reviewing web logs is likely aware that a certain percentage of all traffic bound for their site is malicious, be it uniquely targeted or bot traffic crawling by looking for weak spots.
One such example is remote file include (RFI) attempts. I've been using a Perl script to parse my logs for such traffic but have wanted to use such analysis as an opportunity to learn Python and ultimately rewriting the scripts in Python. While I haven't gotten there yet, I am certain this book will aid me entirely.
Of additional use is the fact that Python 2.6 Text Processing offers additional resources such documentation APIs, community resources such as mailing lists and conferences, as well as discussion of Python 3 and what to expect in migrating.
Returning to the RFI analysis mentioned above, I used Python to pull interesting, related results out of my web logs.
While Chapter 2 of Python 2.6 Text Processing introduces a web server log parser, and builds on it through out the chapter, I was drawn to searching and indexing as described in Chapter 11 via the use of the Nucular libraries (no, not the Bush mispronunciation).
"Nucular is a system for creating full text indices for fielded data. It can be accessed via a Python API or via a suite of command line interfaces."
First, ensure that you've installed the SetupTools easy_install system via python ez_setup.py as discussed on page 23. Once installed issue easy_install nucular, and the libraries and related dependencies will be installed to the appropriate paths.
With some modifications to the provided code samples, I then created an index of three years worth of web logs from my site, and was able to query them as a single source for keywords indicative of RFI attacks. While I started with a simple linear search across multiple logs via text_scan.py as seen on page 302 I quickly learned why McNeil is proving the linear search method as laborious and ineffective, instead promoting the use of libraries such as Nucular, and he's right.
Overall, this book is an effective learning tool, though keep in mind that it's entirely Linux-centric. Syntax for those of you using Python on Windows is subject to nuances.
McNeil's done a solid job with Python 2.6 Text Processing Beginner's Guide; it's a verbose (sometimes he turns on the fire hose) but worthy read and a suggested purchase at $45 +/- direct from Packt, Amazon, or Barnes and Noble, earning 3.5 stars out of 5 (very good).
Give it a read and put those mad new Python skills to good use.
Cheers.

More on OSINT with FOCA 2.6 in toolsmith

“If ignorant both of your enemy and
yourself, you are certain to be in peril.” - Sun Tzu

I'm on a bit of an OSINT kick lately, and I nearly flipped out when I began to research FOCA for toolsmith, then realized the raw, unadulterated power I had yet to make use of.
Shame on me. Don't make the same mistake I did; download FOCA 2.6 pronto.
If you're a penetration tester, this is hands down one of the best reconnaissance tools I've ever imagined. Fear the FOCA indeed.
Really, fear it. You need to be careful with this tool. You can easily walk yourself right into potential legal concerns if you don't proceed with caution and permission.
Consider yourself duly warned.
FOCA is the product of the team at Informatica 64, including Alejandro Martin Bailon and Chema Alonso, who were helpful as I wrote this March's column.

FOCA (Fingerprinting Organizations with Collected Archives) 2.6 is an interesting tool that focuses heavily on document metadata extraction while incorporating other extreme search capabilities. Rather than depending on a variety of recon methods, FOCA will provide many related services for you.
The FOCA project leads have indicated that for more than the last year and a half FOCA has been a primary tool in their own engagements.

Definitely check out their DEF CON 18 presentation; it's truly entertaining and richly informative.

The metadata functionality as seen in Figure 1 speaks for itself. 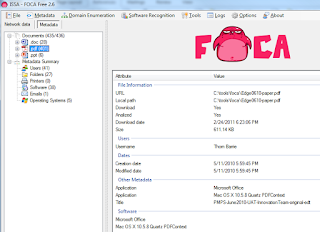 If that's not enough for you, the advanced network reconnaissance and enumeration capabilities ought to seal the deal as seen in Figure 2. 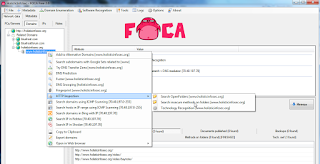 There also an online version of FOCA.

The article can be found here.