Here begins a series regarding web application security inadequacies in online financial service offerings. The services to be discussed will include banks, credit unions, credit card companies, and others. As the economy struggles profoundly, and much of the blame points at the financial sector, I believe it important to point out the false sense of security so many brand-name financial services wrongly instill in their customers.
Often this sense of security is coupled with a typical "security badge" provider, helping drive conversions rather than security, as we will also legitimize how often the badge providers miss the mark on their promises.
Accountability in loan making decisions and practices might have prevented the sub-prime market collapse and the subsequent credit crunch that has hogtied our economy.
Accountability with regard to web application security while providing online financial services is now all the more important as cybercrime will continue to increase at a pace proportionate to economic woes.
Each post relevant to this campaign will include Online Finance Flaw in its title for tracking purposes.
Look forward to surprising flaws in financial services brands you'll recognize.
Perhaps, the more attention we draw to services that should place security above all else, the more likely it is they'll commit to improving their security posture.
Feel free to comment or contribute; we'll begin in a day or two.
at November 29, 2008 No comments:

Mamma.com's got issues other than Mark Cuban's insider trading allegations. As a point of reference for this conversation, Mamma.com is ranked 4064 on Alexa as of today.
I won't profess to following Mr. Cuban's public life and the occasional antics. Obviously, he's a colorful and popular figure; certainly in Dallas, if not nationally.
What follows is not a judgment of Mr. Cuban or his pending legal challenges. I'm sure the process will play itself out accordingly.
A quick summary and some reference material:
The SEC has filed insider trading charges against Mr. Cuban. "According to the SEC, Cuban dumped 600,000 shares, or all of his 6.3% stake, in the search engine Mamma.com (The Mother of All Search Engines), in June 2004 after learning about private financing that the company was proposing. By selling, he avoided losing $750,000, the SEC alleges."
The whole issue for Mr. Cuban was PIPE financing because it's "dilutive to existing shareholders’ stakes."
That's the long and the short of the current issue, and again, not my real interest here, with the exception of the bet I made with myself regarding the probable web application security posture of mamma.com.
All this talk about a popular site immediately sets off the little bell in my head (I hear it a lot).
"What's wrong with the site?" is always the first question I ask myself.

I was not disappointed. 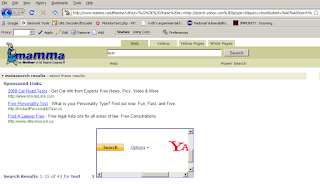 2) XSS vulnerability in the qtype variable. 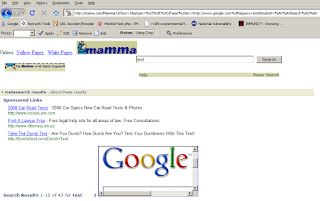 3) XSS vulnerability in their Mammajobs site at the pid variable. This one's weirder still; if you drop an IFRAME in, it simply redirects to any URL you include in the IFRAME string.

4) The prospect of CSRF (rather pointless here given that its just a search engine, but but still defies best practices) appears likely given that mamma.com blindly accepts updates via GET and POST with no sign of a formkey (canary) in sight.

I figured it best to stop there, and have submitted all these to Copernic (the Momma parent company).
I am however truly disappointed that an enterprise as ambitious and motivated as Momma/Copernic seems to have thrown the baby out with the bath water when it comes to web application security.
With regard to Mark Cuban dumping his shares: maybe he was afraid of getting pwned. ;-) All kidding aside, it's a shame that the whimsical and pessimistic thoughts regarding web site security that bounce around in my head inevitably bear themselves out.

As part of an ongoing series, if I may I, the third in a series on the absurd, inane, and perhaps even funny. Lest you forget: the first and second in the series.
I don't know about you, but I enjoy occasionally watching offerings like the History Channel, AMC, or the Military Channel. I'm a 40ish, white male and as such I likely fit the general demographic as perceived by the marketing geniuses who buy the late evening advertising blocks on these channels.
That does NOT mean that I cheat on my taxes and thus need the services of a plethora of scam artists selling tax relief. Nor does it mean that I have any interest in "enhancement" opportunities like Enzyte or ExtenZe.
I just love people who choose to skip out on a primary obligation of citizenship that most of us choose to meet, and expect to magically turn $100,000 in tax debt into $999. Then there are the "businesses" who exploit these folks and willingly convince them of their "success" via the power of advertising, at which point my patience just snaps, as it did last night.
Thus, part one of this rant is a mighty bugger off to all the "tax relief" companies. To their patrons, may I suggest simply paying taxes like the rest of us?
Here's an XSS vulnerability in the Freedom Financial Network, "as seen on TV", designed to express precisely how I feel:

If and when they fix this issue, here's the video for posterity.

Part two of this rant will get you more bang for your buck, and I'm not talking enhancement.
Thanks to my utter disdain for the endlessly annoying advertising I went to the ExtenZe site to see what might be broken which immediately led me to discover an entire platform vulnerability in the ColdFusion application built by Internet Direct Response (IDR), the wankers who proudly bring you Maxoderm, Vivaxa, Vazomyne, Smoke Away, and Hydroxydrene; all such reputable products, and all repetitively wearing me out via DirectTV. At the ExtenZe site I spotted a variable that seemed worthy of building a Googledork from, and I soon discovered that it was a consistent variable in most of the sites pimping this crap; specifically, microppcsite. You can follow all the search results back to our friends at IDR.
A little experimentation and I quickly discovered that the similar microppcterm variable was vulnerable to entertaining XSS exploitation so I started with:

Pick your poison, it works on most IDR gems.

Again, a video, should IDR choose to fix their app.

And now, the grand prize for pathetic: The ExtenZe site is McAfee Secure.

I couldn't make this stuff up if I tried.
You thought www stood for world wide web. Try wee willy wankers. *sigh*

As you are likely aware, I spend a fair bit of time heckling those I believe deserving due to their shortcomings with regard to protecting online consumers.
I do, however, continue to seek opportunities to shed positive light as well, and recent responses from a number of vendor/developers warrant an opportunity to do just that.
In the last 30 days, I've discovered vulnerabilities in products from four different vendors, and advised them all immediately upon discovery. Usually, that's where the story ends, as sadly, my repeated requests for action are often ignored. The last 30 days have proven to be entirely different, with swift responses and action from ALL vendors to whom I reported vulnerabilities. In all cases I received replies within 24 hours or less, and patches/fixes/updates were typically released within 24-72 additional hours. These are exemplary responses, and reflect why I choose to conduct vulnerability research. I believe we, as web application professionals (both developers and security practitioners), are beholden to the greater public and must endeavor to protect the online safety of the Internet consumer.
To each of these vendors/developers I'd like to issue a hearty "well done" and issue public kudos for their diligence and security consciousness, on behalf of consumers and website operators.
To Lukas of PlanetLuc, Jasper and Eric of Infrae/Silva, Alexander of CompactCMS, and Peter from ActiveCampaign may I say that your efforts are greatly appreciated. Where too few choose to do the right thing, your responses leave us with the perception of caring and integrity.
Thank you.