First, an apology. I've not been posting much; heads down on grad school work.

I recently had the opportunity to interview Alexei Czeskis, the captain of the University of Washington (UW) team who won this year's National Collegiate Cyber Defense Competition (CCDC).
During my discussion with Alexei I was immediately drawn to the fact that his approach and tactics closely mirror those of mature security incident response teams.
First, a quick break down on the CCDC:
"You have just been hired as the network and security administrators at a small company and will be taking administrative control of all information systems. You know very little about the network, what security level has been maintained, or what software has been installed. You have a limited time frame to familiarize yourself with the network and systems and to begin the security updates and patches before the red team starts actively attacking your company. In the midst of all the commotion, you have to keep up with the needs of the business and user demands while maintaining service level agreements for all critical Internet services. Welcome to the first day of the National Collegiate Cyber Defense Competition (CCDC)."
The CCDC process begins with regional contests wherein 100+ schools participate at the appropriate regional contest from January until the end of March.

The UW team has won the regional all four years it's participated.

That said, they had not achieved success at the national level due to what Alexei described as a lack of planning and strategy.
Analogy 1: You cannot be successful at incident response without standard operating procedures, defined roles, practice and drilling, as well common strategy.
Of the steps Alexei prescribed for his team in advance of the contest(s):
• Roles predefined
• Have a “three hour plan”: what are your first steps for identification of vulnerabilities, short term mitigations, and longer term remediation and hardening
• Practice in advance, ensure broad knowledge
• Define primary and secondary subject matter expert for each roll
• Define a true "captain" (officer)
• Team members concentrate on their individual domains

According to Alexei, maintaining order was key to winning.
Analogy 2: Incident "management" is essential. This role includes conflict resolution, and motivation.
Some of Alexei's key pointers:
1. It's important to know your players’ (incident responders’) weaknesses.
2. Identify those who can’t multitask or self-manage; some people need direction, some don’t.
3. Learn who needs help but won’t ask.
4. Human component is massive, know as much as you can in advance (of an incident)
5. One person managing is hugely important.
6. Keep morale up; team cohesion is the most important thing!
With six undergrads, an additional grad student, and Alexei as captain, the UW team managed to keep a very concerted, highly capable red team (military, penetration testing professionals) at bay.
As an example, we're talking about Air Force people who like to write their own Windows rootkits and wreak havoc on unsuspecting blue teams.
The CCDC always includes an interesting element, a "white" team if you will, to throw in administrative overhead, define use of social media, and introduce some real reliability elements.

New this year was a "cloud" component, executed via virtualization (lack of access, no IDS (span), and no firewall making it very difficult to defend).
Analogy 3: Incident response in the cloud is difficult! Cloud response includes requirements of components and features often well beyond your control.
Alexei and team learned some painful lessons quickly:
It’s easy to lock out of cloud machines (be gentle); don't enable the firewall but forget to add exception for yourselves.

Some closing points from our discussion.
Alexei would utilize these tactics if he were employed as a security incident manager.
He stressed avoiding big morale hits, and to "just worry about doing your best, not winning."
As a security incident manager, I can tell you with certainty that this is sound thinking and methodology.
It's not about winning, but it is about trying to be excellent in tactics and service.

Alexei and the UW team are clearly excellent: well done!

You, dear readers, all know I'm a tool dork.
Quite possibly, some of you may further think I'm a tool and/or a dork; we'll take that for granted. ;-)
When I write toolsmith each month, I end up immersing myself very deeply in the intended tool topic. My effort for May 2011 was no different; I went way down the rabbit hole with Doug Burks' Security Onion (SO).
Net result? Mad props.
Doug continues to enhance what is the most immediately useful Live CD/DVD available to NSM practitioners.
I'll let my conclusion from the article serve as impetus for your further reading and use of Security Onion:
"I’ll try to avoid flagrant gushing, but Security Onion employs a congregation of the most important tools available to security and network analysts that I’ve ever discussed. Attack and reconnaissance tools are important, but I am the ultimate blue-teamer at heart. I’ve said it before: “What you don’t see can hurt you.” You can see better with Security Onion and its well-implemented deployments of Snort/Suricata, SANCP, and Sguil/Squert. I will simply say that you can defend yourselves, and those you are charged with protecting, better with the likes of Security Onion." 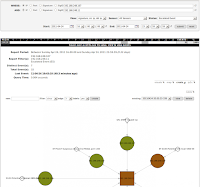 Repeating from article again:
"Job well done, Doug. As an ISSA member I’m proud of your work and your contributions to our association and community.
Readers, take advantage of this noteworthy effort."

Ping me via email if you have questions (russ at holisticinfosec dot org).
Cheers.