Sysmon just keeps getting better.
I'm thrilled to mention that @markrussinovich and @mxatone have released Sysmon v6.
When I first discussed Sysmon v2 two years ago it offered users seven event types.
Oh, how it's grown in the last two years, now with 19 events, plus an error event.
From Mark's RSA presentation we see the current listing with the three new v6 events highlighted.


"This release of Sysmon, a background monitor that records activity to the event log for use in security incident detection and forensics, introduces an option that displays event schema, adds an event for Sysmon configuration changes, interprets and displays registry paths in their common format, and adds named pipe create and connection events."

Mark's presentation includes his basic event recommendations so as to run Sysmon optimally.

I strongly suggest you deploy using these recommendations.
A great way to get started is to use a Sysmon configuration template. Again, as Mark discussed at RSA, consider @SwiftOnSecurity's sysmon-config-export.xml via Github. While there are a number of templates on Github, this one has "virtually every line commented and sections are marked with explanations, so it should also function as a tutorial for Sysmon and a guide to critical monitoring areas in Windows systems." Running Sysmon with it is as easy as:
sysmon.exe -accepteula -i sysmonconfig-export.xml

As a quick example of Sysmon capabilities and why you should always run it everywhere, consider the following driver installation scenario. While this is a non-malicious scenario that DFIR practitioners will appreciate, rather than the miscreants, the detection behavior resembles that which would result from kernel-based malware.
I fired up WinPMEM, the kernel mode driver for gaining access to physical memory included with Rekall, as follows:
Upon navigating to Applications and Services Logs/Microsoft/Windows/Sysmon/Operational in the Windows Event Viewer, I retrieved the expected event:

The best way to leave you to scramble off and deploy Sysmon broadly, are with Mark's Best Practices and Tips, again from his RSA presentation. 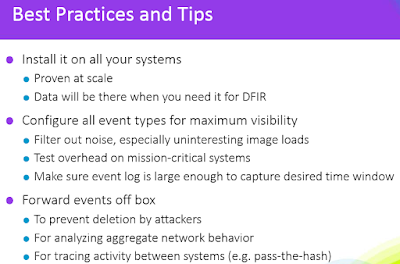 This is the 300th post to the HolisticInfoSec™ blog. Sparta, this isn't, but I thought it important to provide you with content in a warrior/philosopher mindset regardless.
Your author is an Aikido practitioner, albeit a fledgling in practice, with so, so much to learn. While Aikido is often translated as "the way of unifying with life energy" or as "the way of harmonious spirit", I propose that the philosophies and principles inherent to Aikido have significant bearing on the practice of information security.
In addition to spending time in the dojo, there are numerous reference books specific to Aikido from which a student can learn. Among the best is Adele Westbrook and Oscar Ratti's Aikido and the Dynamic Sphere. All quotes and references that follow are drawn from this fine publication.
As an advocate for the practice of HolisticInfoSec™ (so much so, I trademarked it) the connectivity to Aikido is practically rhetorical, but allow me to provide you some pointed examples. I've tried to connect each of these in what I believe is an appropriate sequence to further your understanding, and aid you in improving your practice. Simply, one could say each of these can lead to the next.

The Practice of Aikido
"The very first requisite for defense is to know the enemy."
So often in information security, we see reference to the much abused The Art of War, wherein Sun Tzu stated "It is said that if you know your enemies and know yourself, you will not be imperiled in a hundred battles." Aikido embraces this as the first requisite, but so too offers the importance of not underestimating your enemy or opponent. For information security, I liken it to this. If you are uninformed on adversary actor types and profiles, their TTPs (tools, tactics, procedures), as well as current vulnerabilities and exploits, along with more general threat intelligence, then you are already at a disadvantage before you even begin to imagine countering your opponent.

"A positive defensive strategy is further qualified as being specific, immediate, consistent, and powerful."
Upon learning more about your adversary, a rehearsed, exercised strategy for responding to their attack should be considered the second requisite for defense. To achieve this, your efforts must include:
As your detection and response capabilities improve with practice and repetition, your meantime to mitigate (MTM) and meantime to remediate (MTR) should begin to shrink, thus lending to the immediacy, consistentcy, and power of your defense.


The Process of Defense and Its Factors
"EVERY process of defense will consist of three stages: perception, evaluation-decision, and reaction."
These should be easy likenesses for you to reconcile.
Perception = detection and awareness
The better and more complete your threat intelligence collection and detection capabilities, the better your situational awareness will be, and as a result your perception of adversary behaviors will improve and become more timely.
Evaluation-decision = triage
It's inevitable...$#!+ happens. Your ability to quickly evaluate adversary actions and be decisive in your response will dictate your level of success as incident responders. Strength at this stage directly impacts the rest of the response process. Incorrect or incomplete evaluation, and the resulting ill-informed decisions, can set back your response process in a manner from which recovery will be very difficult.
Reaction = response
My Aikido sensei, after doing so, likes to remind his students "Don't get hit." :-) The analogy here is to react quickly enough to stay on your feet. Can you move quickly enough to not be hit as hard or as impactfully as your adversary intended? Your reaction and response will determine such outcomes. The connection between kinetic and virtual combat here is profound. Stand still, get hit. Feign or evade, at least avoid some, or all contact. In the digital realm, you're reducing your time to recover with this mindset.

Dynamic Factors
"A defensive aikido strategy begins the moment a would-be attacker takes a step toward you or turns aggressively in your direction. His initial motion (movement) in itself contains the factors you will use to neutralize the action of attack which will spring with explosive force from that motion of convergence."
Continuing on our theme of inevitability, digital adversaries will, beyond the shadow of a doubt, take a step toward you or turn aggressively in your direction. The question for you will be, do you even know when that has occurred in light of our discussion of requisites above? Aikido is all about using your opponent's energy against them, wherein, for those of us in DFIR, our adversary's movement in itself contains the factors we use to neutralize the action of attack. As we improve our capabilities in our defensive processes (perception, evaluation-decision, and reaction), we should be able to respond in a manner that begins the very moment we identify adversarial behavior, and do so quickly enough that our actions pivot directly on our adversary's initial motion.
As an example, your adversary conducts a targeted, nuanced spear phishing campaign. Your detective means identify all intended victims, you immediately react, and add all intended victims to an enhanced watch list for continuous monitoring. The two victims who engaged the payload are quarantined immediately, and no further adversarial pivoting or escalation is identified. The environment as a whole raised to a state of heightened awareness, and your user-base becomes part of your perception network.


"It will be immediate or instantaneous when your reaction is so swift that you apply a technique of neutralization while the attack is still developing, and at the higher levels of the practice even before an attack has been fully launched."
Your threat intelligence capabilities are robust enough that your active deployment of detections for specific Indicators of Compromise (IOCs) prevented the targeted, nuanced spear phishing campaign from even reaching the intended victims. Your monitoring active lists include known adversary infrastructure such that the moment they launch an attack, you are already aware of its imminence.
You are able to neutralize your opponent before they even launch. This may be unimaginable for some, but it is achievable by certain mature organizations under specific circumstances.

The Principle of Centralization
"Centralization, therefore, means adopting a new point of reference, a new platform from which you can exercise a more objective form of control over events and over yourself."
Some organizations decentralize information security, others centralize it with absolute authority. There are arguments for both, and I do not intend to engage that debate. What I ask you to embrace is the "principle of centralization". The analogy is this: large corporations and organizations often have multiple, and even redundant security teams. Even so, their cooperation is key to success.
Even with a logically decentralized security model, organizations can embrace the principle of centralization and achieve an objective form of control over events. The practice of a joint forces focus defines the platform from which teams can and should operate.

Adversarial conditions, in both the physical realm, and the digital realm in which DFIR practitioners operate, are stressful, challenging, and worrisome.
Morihei Ueshiba, Aikido's founder reminds us that "in extreme situations, the entire universe becomes our foe; at such critical times, unity of mind and technique is essential - do not let your heart waver!" That said, perfection is unlikely, or even impossible, this is a practice you must exercise. Again Ueshiba offers that "failure is the key to success; each mistake teaches us something."
Keep learning, be strong of heart. :-)
Cheers...until next time.
at February 08, 2017 No comments: