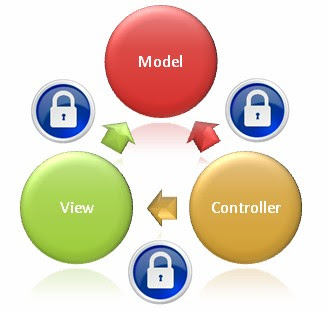 I just read a recent Dr. Dobb's article, as posted in Information Week and online, that provides perspective regarding moving from ASP.NET to ASP.NET.MVC.
Some quick highlights from the article to frame this discussion.
First, ASP.NET.MVC applies the "Model-View-Controller (MVC) to ASP.NET. The MVC pattern, which is frequently used in the design of web sites, aims to separate data, business logic, and the presentation to the user. The challenge in many cases is keeping business logic out of the presentation layer; and careful design based on MVC greatly reduces the prospect of this intermingling."
Second, the various perspectives.

ASP.NET.MVC upside:
"ASP.NET MVC is technically superior to ASP.NET Web Forms because, having been released five years later, it addresses the business and technology changes that have occurred during the intervening period — testability, separation of concerns, ease of modification, and so on."

The ASP.NET.MVC vs ASP.NET middle ground:
"When it comes to the core function, however, there is nearly no difference."

The ASP.NET.MVC downside:
"ASP.NET MVC has greater startup costs. And in some applications, ASP.NET MVC is a substantial turnaround from ASP.NET Web Forms."

I have no take on these positions either way; they all seem reasonable, but the topic triggered dormant thoughts for me bringing back to mind some interesting work from a couple of years ago.

The Dr. Dobb's M-Dev article, while clearly operating from the perspective of development and deployment, does not discuss some of the innate security features available to ASP.NET.MVC users that I think help give it an edge.

Preventing Security Development Errors: Lessons Learned at Windows Live by Using ASP.NET MVC is a November 2009 paper that I've already discussed and is well worthy of another read in this context.
I'll use this opportunity to simply remind readers of ASP.NET.MVC's security-centric features, including available tutorials.

1) Preventing Open Redirection Attacks
Open redirection (CWE-601) is easily prevented with ASP.NET.MVC 3 (code can be added with some modification to ASP.NET MVC 1.0 and 2 applications).
In short, the ASP.NET MVC 3 LogOn action code has been changed to validate the returnUrl parameter by calling a new method in the System.Web.Mvc.Url helper class named IsLocalUrl(). This ASP.NET.MVC tutorial is drawn from Jon Galloway's blog.

2) Prevent CSRF
From the Windows Live paper:
"To defend a Web site against XSRF attacks, ASP.NET MVC provides AntiForgeryToken helpers. These consist of a ValidateAntiForgeryToken attribute, which the developer can attach to controller classes or methods, and the Html.AntiForgeryToken() method."

3) JSON hijacking
Casaba contributed to the Windows Live paper. From their blog:
"For JSON hijacking, they ensure that the JSON result included a canary check by default. This prevented developers from being able to return JSON without a canary, thus preventing JSON hijacking."
Much like the CSRF mitigation, the canary check comes through again.
The Windows Live method defined a custom ASP.NET MVC Action Filter attribute to define the HTTP verbs they would accept and ensure that each action required the use of a canary.

It's also a straightforward process to prevent JavaScript injection & cross-site scripting (XSS) in the ASP.NET.MVC View or Controller via HTML.Encode where you:
a) HTML encode any data entered by website users when you redisplay the data in a view
b) HTML encode the data just before you submit the data to the database
See Stephen Walther's tutorial for more.

In summary, in addition to ASP.NET.MVC's development and functionality features, perhaps these security-centric features may help you decide to make the move to ASP.NET.MVC.