Here we go again.
The cross-site scripting (XSS) issues on the Ameriprise advisor locator site were fixed, even if temporarily, back when Dan Goodin reported on the issue in August.
A little bird whispered in my ear the other day and told me a sad tale:
they're baaaaack.
Regression testing anyone?
Regression testing (from the Wikipedia entry recommends that:
"in most software development situations it is considered good practice that when a bug is located and fixed, a test that exposes the bug is recorded and regularly retested after subsequent changes to the program.
What a grand idea! Ensure that you don't reintroduce old flaws when you roll old code.
Really? I have to say it?
Apparently. 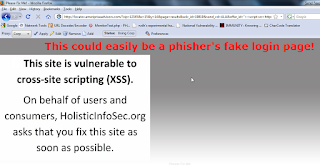 Dan & El Reg have covered the issue again given that, in order to have it fixed again, I had to ask him to ping the Ameriprise PR department.