My monthly toolsmith column in the September 2009 edition of the ISSA Journal features OffVis, a tool for detecting malicious Microsoft Office documents. This tool was created by MSRC's Engineering team, a group that spends a great deal of time looking for ways to detect exploitation of given vulnerabilities, in particular those that are Office-related.
Their efforts led to the creation of OffVis, starting in November 2008. First released in beta to MAPP participants, it has matured into a UI-based tool that analyzes a very specific set of vulnerabilities in order to better help defenders. MSRC Engineering’s work allows them to build detection logic, and then reuse it as part of ongoing analysis efforts.

Excerpt:
A typical targeted attack often includes an email sent to an intended victim with a malicious Excel document attached. When the victim opens the Excel document the following sequence might occur. First, it exploits a vulnerability to force Excel to run embedded shellcode. The shellcode then extracts an XOR’d, well-formed XLS file, and an EXE. The XLS opens in Excel, and the extracted EXE is executed which installsa backdoor as a service.9 This actual limited targeted attack resulted in Microsoft releasing KB 94756310 on January 15, 2008. The OffVis Excel parser includes detection logic for CVE-2008-0081,11 the National Vulnerability Database CVE released in accordance with KB 947563. We’ll look at a specific sample exploiting CVE-2008-0081 in Using OffVis.
Stepping through the exploit more specifically might appear as seen in Figure 2. 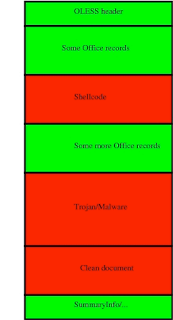 Typical exploit structure (Figure 3) ensures that everything is included in the document; please note that there can be variations including multiple shellcode stages, multiple Trojans, and obfuscation of both Trojan and the document.

For a much deeper dive into exploit structure, as well as disassembly and debugging techniques, see Bruce Dang’s topical Black Hat Japan 2008 presentation.

The article PDF is here.
Grab OffVis here.
Thanks to Dan, Kevin, Bruce, Robert, and Jonathan for the time and feedback that contributed to this month's article.
Cheers.