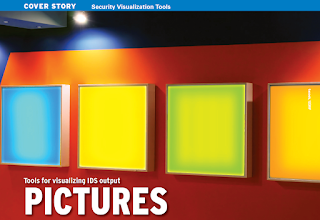 The September 2009 issue (106) of Linux Magazine features a cover story I've written that I freely admit I'm very proud of. Tools for Visualizing IDS Output is an extensive, comparative study of malicious PCAPs as interpreted by the Snort IDS output versus the same PCAPs rendered by a variety of security data visualization tools. The Snort rules utilized are, of course, the quintessential ET rules from Matt Jonkman's EmergingThreats.net. This article exemplifies the power and beauty of two disciplines I've long favored: network security monitoring and security data visualization.

Excerpt:
The flood of raw data generated by intrusion detection systems (IDS) is often overwhelming for security specialists, and telltale signs of intrusion are sometimes overlooked in all the noise. Security visualization tools provide an easy, intuitive means for sorting through the dizzying data and spotting patterns that might indicate intrusion. Certain analysis and detection tools use PCAP, the Packet Capture library, to capture traffic. Several PCAP-enabled applications are capable of saving the data collected during a listening session into a PCAP file, which is then read and analyzed with other tools. PCAP files offer a convenient means for preserving and replaying intrusion data. In this article, I'll use PCAPs to explore a few popular free visualization tools.For each scenario, I’ll show you how the
attack looks to the Snort intrusion detection system, then I’ll describe how the same incident would appear through a security visualization application.

The article gives DAVIX its rightful due, but also covers a tool to be included in the next DAVIX release called NetGrok. If you're not familiar with NetGrok, visit the site, download the tool and prepare to be amazed. 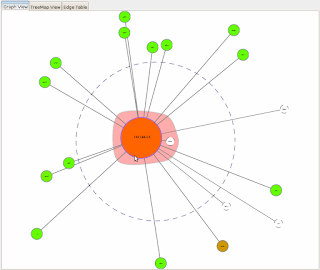 I'll be presenting this work and research at the Seattle Secureworld Expo on October 28th at 3pm. If you're in the area, hope to see you there.

This issue of Linux Magazine is on news stands now, grab a copy while you can. It includes Ubuntu and Kubuntu 9.04 on DVD so it's well worth the investment.

Grab NetGrok at your earliest convenience and let m know what you think.
Cheers.

Could you please post an updated pointer to the PCAPs you reference in the article. The provided link,

Pinging Linux Magazine to correct. In the interim all PCAPs mentioned in the article, as well as a couple of others are here.