As I mention in this month's toolsmith, I am often reminded of all the tools I have not yet written about but have used on numerous occasions or even forgotten about. Such is the case with the NirSoft tools, particularly those found on the Windows side of the Helix distribution under IR.
Five NirSoft tools resurfaced for me well worthy of toolsmith mention as well as a place in the jumpkit.
Incident handler Kris Thomas used CurrPorts during a PCI DSS-related incident response drill we were conducting and promptly located the fake malicious process I’d seeded on a server as part of the drill.
Light-bulb moment: October's ISSA Journal toolsmith: The Nirsoft Collection is written to help you prevent one of those "doh!" moments. "Oh yeah, I'd forgotten all about that tool."
I'll simply rehash visual results of various tests I conducted for October's article.
Figure 1 is a CurrPorts screen shot taken before infection of the test VM with Backdoor.Win32.Agent.adqt (MD5: 6DBA44B457414593A858A3520A2F2278).

Figure 2 is the same view post-infection with the addition of bonus IPNetInfo results. 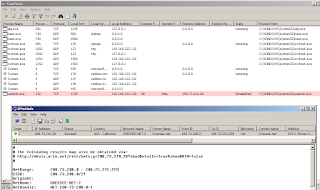 OpenedFilesView is exactly what it says it is, open or locked files on a given Windows system.

Figure 4 represents OpenedFilesView perspective post-infection where you'll note that the malicious binary has invoked Internet Explorer as we see changes to index.
dat. A quick review of C:\Documents and Settings\...\Cookies\ shows two cookies written to the system dated 9/26/10 for globo.com. Again, a bit of search engine research via site:threatexpert.com globo.com will reveal endless hits on various malicious behavior associated with globo.com, with particular emphasis on Brazilian malware.

Like it's fellow OpenedFilesView, WhatInStartup couldn't be more precise in its naming if it tried. Yep, it identifies what auto-loads when the system starts; always a good place to look for malicious basterds [sic].
Figure 5 is a WhatInStartup baseline screen-shot. 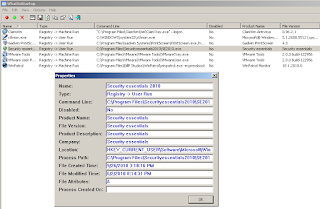 Last but not least, NirCmd. This tool is interesting not overtly security-centric but good for pulling up registry entries or killing processes particularly when explorer.exe is hung.
Example: nircmd.exe regedit “HKEY_CURRENT_USER\Software\Microsoft\Windows\CurrentVersion\Run”

The article is available here, the tools and others are here.
Use these oldies but goodies in good stead.
Cheers.

Ok maybe I'm missing something but what's the advantage of currports over say "netstat -b"?

Honestly, not a whole lot.
CurrPorts is GUI-based, does include incorporation of IPNetInfo, which is handy, and offers a direct reporting mechanism in various formats.
The ability to right-click and kill a malicious process and its TCP connection(s) from the UI also has potential advantages.
When it' all said and done, the real difference is convenience.

Fair enough Russ, thanks for the follow-up.