From a state that could definitely use congressional members with a bit more intellectual savvy comes Michigan's Pete Hoekstra.
Graham Cluley's blog states:
Hoekstra told The Washington Times' America's Morning News radio show that "it's time for America, South Korea, Japan and others to stand up to North Korea" by launching a retaliatory cyber attack or international sanctions.
Graham took Hoekstra to task for this moronic idea yesterday, before today's headlines quickly began to reveal the possibility that the attacks against S. Korea and the US may have actually originated in the UK. The simple reality is, maybe it did, maybe it didn't. The premise that one nation state should launch a cyber attack against another based on the presumise that they might be responsible for a DDoS attack is short-sighted to say the least.
Should we now cyber-bomb our British friends, Mr. Hoekstra? I believe, amongst other things, we and the Brits can agree that you are assuredly a daft git.
Dear readers, this is a man who recently Tweeted "Iranian Twitter activity similar to what we did in House last year when Republicans were shut down in the House."
Wow. Really?
For a good chuckle read Pete Hoekstra is a Meme.
I'm reminded of Ted Stevens' famous take on the Internet as a "series of tubes". 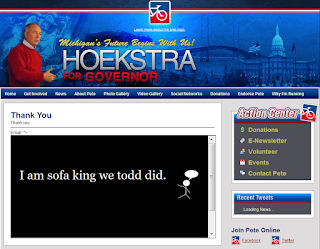 Thus, Pete Hoekstra is hereby awarded my second ID Ten C Award for foolishness above and beyond the call of duty.