More good news for malware analysts and security practitioners alike.
Straight from Peter Silberman, further details on the new version of Audit Viewer, inclusive of lots of significant changes.
The new Audit Viewer, should be used in conjunction with the newly released Memoryze-1.3 (which offers Vista support (beta), dll injection detection, enumeration of PE imports/exports in memory, F-Response support, and a slew of bug fixes.

Pictured below is a screen shot of the newest feature, Memoryze Launcher. You can now control Memoryze from a GUI. You have all the options you normally would, but you don’t have to edit any XML! The launcher supports multiple jobs. After your jobs run, any XML will be auto-loaded into Audit Viewer for seamless integration. If you specify a MemoryDD, then the image file be auto set to the text box so you can go from acquisition to analysis. 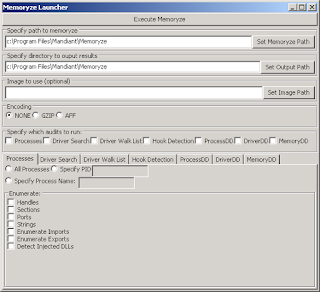 But wait, there’s more! A process with an injected dll will now appear in red text:

You can view the imports/exports of the injected dll in the Memory Sections view (the red entries indicate that memory sections that contains a PE file):

If you haven't yet downloaded Memoryze, Audit Viewer, and MindSniffer, all I can say is "What are you waiting for?!"

Thanks for the update, Peter.